Was this episode better than last week’s episode? Yes. Am I curious yet? Not really. I mean, I’m curious about when I get to see Alex again. I’m curious about whether or not this is a riff on Roswell Original Flavor’s Skins arc. Otherwise, everything just feels disjointed, like the plot is happening to the characters instead of the characters . . . you know what, I’ve said it all before, so I’ll save it.
Like last week, I have questions without answers. Fewer questions, but still questions. Although, I have answered a personal question. See, I thought Michael’s mustache was growing on me, but it isn’t. I was just distracted by his pretty pretty eyes. Look, I want it to grow on me, but it defies the rule of thirds.
Let’s get started. Sing along if you know it.
Give Me a Sign 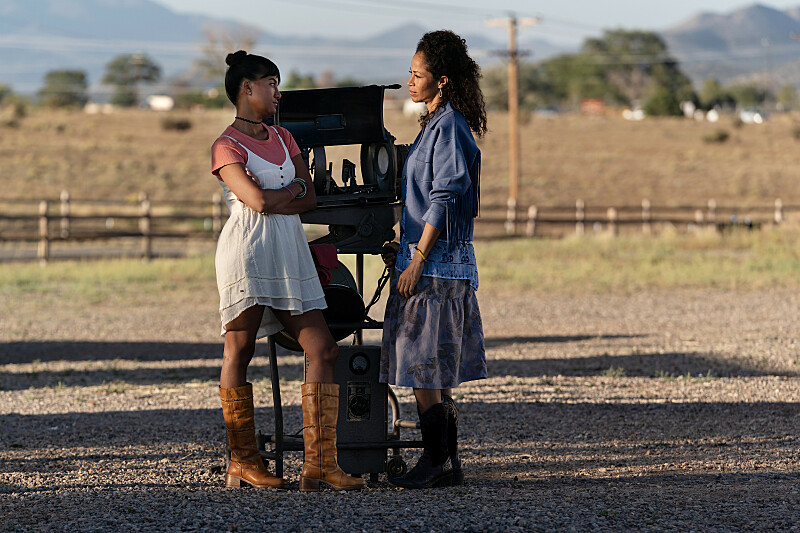 A perfect example of the plot happening to the characters—Mimi’s death. In her final moments, Mimi gives Maria a cryptic message, pointing at the palm of her own hand, before dying outside the Wild Pony. Will it turn out that she actually needed to die to deliver a message to her daughter? I doubt it. Sure, they’ll probably have Mimi deliver another crucial message from ghost world, but it didn’t need to be that way. In reality, Mimi had to go, so Maria would have a storyline this season other than whining about her absent powers.

Consider this: Mimi, once again, escapes the least secure assisted living facility in New Mexico, delivers the message to Maria, falls into a deep coma, and wakes up in the penultimate episode, so the other characters can celebrate her return before the wedding or double wedding or triple wedding or alien baby in the finale?

As expected, the gang rallies around Maria in her grief. Michael shows up on the phone, so the writers can prove, to viewers, that they haven’t forgotten about Alex. He’s letting Alex know that Maria’s going to need him. I so badly want to say that Maria’s had more of Alex than was necessary or palatable, but I won’t because it isn’t necessary.

I’ll miss Mimi; she was serenity and beauty and whimsy, and I enjoyed her scenes with the other characters. But the grief just wasn’t convincing. I don’t mean that in the sense that they were grieving incorrectly, but in the sense that it felt phoned in. This moment didn’t tap into my emotional center. Could it be that I don’t have a heart? Possibly, but I do have a brain, which leads us to the rest of the episode.

Got Lost in the Game 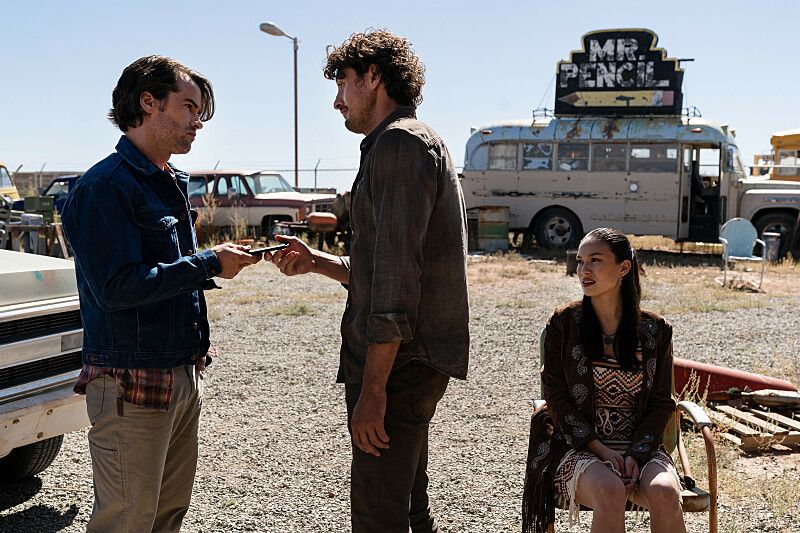 Dallas is still Maria’s bestie because Michael has gone undercover in hopes of learning more about his background Bonnie and Clyde’s plan. I feel like there are three important things we need to discuss from this subplot. The first being the Oasian fruit. The second being Eduardo in his underwear. The third being Nora as Handy Smurf.

Did you think I was going to say the kiss? Definitely wasn’t. I saw that coming in 2021 when they announced the casting. Besides, everyone knows Alex is and always has been what Michael loves most in every galaxy. Also, teenagers get crushes on their teachers all the time. I can’t be the only one that thinks Bonnie reads as an 8th grader.

Back to the fruit, thighs, and Handy Smurf. I’ve had a saliva thing since birth. Once you bite directly into my fruit, it’s yours. I’m not putting it back in the fruit bowl to touch the other fruit, and I’m definitely not eating it. I don’t care how rare it is. Also, are viewers not supposed to recognize dragon fruit?

Then there was Eduardo tied to a chair in his super soft looking undies. So, turns out this shapeshifter needs to change into the clothes of the person they turn into. For those of you that watched the original Roswell, did Nasedo need to change into clothes? I feel like he didn’t. It just seems like an unnecessary complication. Not to mention, the tattoo not going away is ridiculously lame. However, I do like the leftover blue eyes. It’s a step up from the original and the reason we don’t need the tattoo. Also, where was underwear Eduardo going?

It turns out Nora built another thing. Nora was busy. According to Bonnie, this particular device, which looks like something I smashed on my pottery wheel crossed with a Nintendo controller, has the ability to take the aliens back to The Oasis. They still need the final piece, which Max is safely carrying around in his pocket. Since it sort of looks like a controller, how many of us think it goes with the console in Michael’s lair.

Ready for some questions? Could Michael always generate fire at will? Is this something we knew? And why would Clyde be suspicious of a ring? Is Clyde well versed in Earth secret agent gadgets? Also when did Jones have these indepth convos with Bonnie, Clyde, and Tezca? Was it inbetween his murder, mischief, mayhem, deputying, and kidnapping? And why didn’t he mention that his son, Michael Guerin, was his enemy?

I don’t want to talk about Isobel and Anatsa. They should have established and ended their relationship last season instead of having Isobel violate her mind and gaslight her. Everyone knew Kyle and Isobel was coming. And now here we are, in the show’s final freaking season having wasted four of thirteen episodes to end Isobel and Anatsa’s relationship.

Max and Liz were corny and blah. Truthfully, the corny line about the turquoise should have gone to Michael and Alex. Perhaps the writers forgot about Michael giving Alex turquoise at the drive-in last season. Turquoise that lead to the music playing on Nora’s science project alien radio, Kyle’s radio, both of which led to other stuff. Turquoise doesn’t have any significance for Max and Liz. It was clearly done because the two of them need to have a “romantic” moment in every episode even when it doesn’t hold any resonance. I have thoughts on why this keeps happening despite Hollier’s claims of Michael and Alex’s romance holding the same level of importance. Happy Pride, friends. The handholding during the truck lift was enough to justify Liz’s celebratory leap, Max’s catch, and their kiss. No comment about turquoise required.

A Moment That Is Mine

Oh, Dallas had a memory about his father’s necklace while trying to use his powers. I guess we’ll see how it connects to shapeshifters, Nora’s gadget, Mimi’s secret, Alex’s disappearance, sacred alien trees, a tech billionaire and her wife, St. Elmo’s fire, Jones’ potential ressurection, Michael’s mustache, The Alighting, the console, and whatever I’ve forgotten.

This is getting long, so let’s end with a Round Robin:

~ Why is Kyle investigating alien stuff alone? He doesn’t have powers, so it seems extra dangerous. Is that Shiri Appleby Liz’s mentor in the pod?

~ Cameron brings Michael a cool tracker ring. I wonder if it reminds him of the cool tracker necklace he gave Alex? Does he know it can be used as a tracker? Do they need Rosa for that? Where is Rosa?

~ Does Liz’s science do anything more than confirm what we already know about Tezca AKA the new Nasedo?

Who Is Charlotte Ritchie? About The Actress Playing Kate In ‘You’ – Hollywood Life

So I hosted THE FINAL skin contest in ABA

Who Is Charlotte Ritchie? About The Actress Playing Kate In ‘You’...