Birmingham had the better of the chances in both halves but found themselves behind to Sunderland’s first real chance of the game, as Diallo held up the ball brilliantly before finding Ellis Simms in space, and his driven effort was too powerful for John Ruddy to keep out.

Scott Hogan, the Championship’s top goalscorer, wasted a pair of fine first-half chances either side of the goal and would regret those misses further when Diallo doubled the away side’s lead with a wonderful finish at the end of a rapid break.

Lukas Jutkiewicz came off the bench as Birmingham threw the kitchen sink at their visitors and his goal gave them hope with 12 minutes left, but Sunderland held on despite an avalanche of late pressure from the hosts to earn a third win from four games which lifts them into the top half of the Championship table. 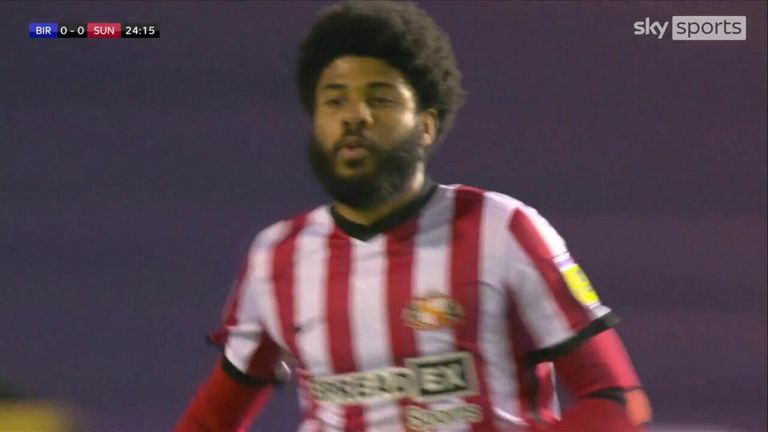 How Sunderland shook off injury troubles for rare win at Birmingham

The Black Cats came into the game missing six players through a mixture of injury and suspension, and had to endure a spell of early Birmingham pressure, which culminated in Troy Deeney heading against the post from Auston Trusty’s flick.

They would have anticipated that fast start as the Blues had already scored six goals in the opening 15 minutes of matches this season, but having survived they turned the tables on their hosts and netted from their first real chance. Diallo held off a number of challenges, despite being knocked to the ground by debutant starter Jobe Bellingham, and regained his balance to feed Simms inside the box. The striker did the rest, powering an effort past Ruddy for an opener against the run of play.

Birmingham continued to make their own opportunities with Deeney turning provider for Hogan, but the nine-goal striker was denied by Anthony Patterson when shooting straight at the goalkeeper after he had been played clean through.

Any Sunderland worries that more of the same would follow after half-time were extinguished in real style three minutes into the second period, as Diallo latched onto Jack Clarke’s lovely ball from well inside his own half before skipping inside Trusty’s challenge, and curling a delightful effort in off the far post to leave Ruddy with no chance. 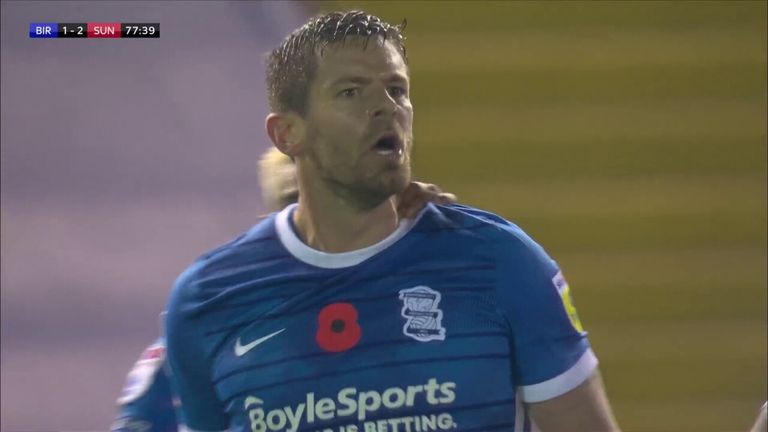 Lukas Jutkiewicz gives Birmingham hope of a comeback against Sunderland

Birmingham huffed and puffed and created a number of half-chances without testing Patterson again, until substitute Jutkiewicz took full advantage when Bailey Wright failed to clear a low cross from Emmanuel Longelo, and buried it into the bottom corner from 12 yards.

The hosts threw the kitchen sink at Sunderland from then on, and came inches away from an equaliser with time running out. A free-kick was flicked on by Jutkiewicz for centre-back Dion Sanderson, who showed the composure of a seasoned striker to bring the ball down and turn it goalwards – only for Trai Hume to deny him with a sliding block on the line.

It ended being Birmingham’s final opportunity despite relentless late pressure on the Sunderland goal – as the visitors held on for a hard-fought three points.

What the managers said… 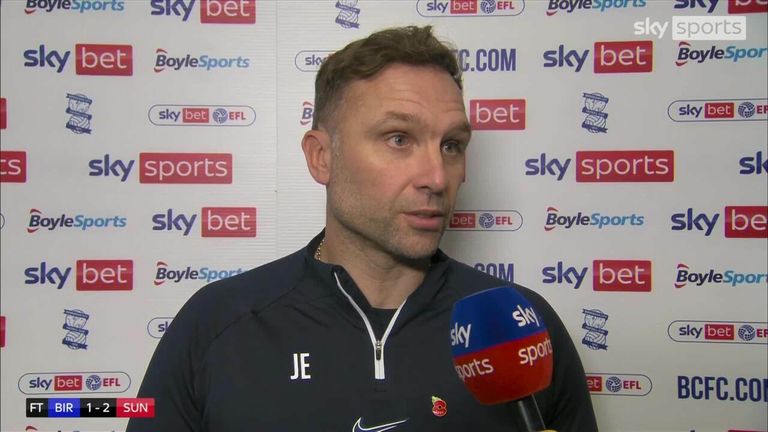 Birmingham manager John Eustace told Sky Sports: “It was always going to be a difficult game for us at the end of a tough schedule. It was important to stay in the game as long as possible but we gave away two sloppy goals which stopped us doing that.

“I knew the impact of the subs would be massive tonight and they made a big impact. We didn’t deserve to lose the game, but we gave ourselves too much to do. Credit to Sunderland, and we move on.

“We were too soft in midfield, lost too many duels, and then ultimately for the first goal we’re out of position and the lad scores a fantastic goal. We know all about Diallo too, cutting in on his left foot, so that’s disappointing too.

“It’s been a really good run of form for us, but the lads have worked their socks off and are exhausted after a real tough run of games.” 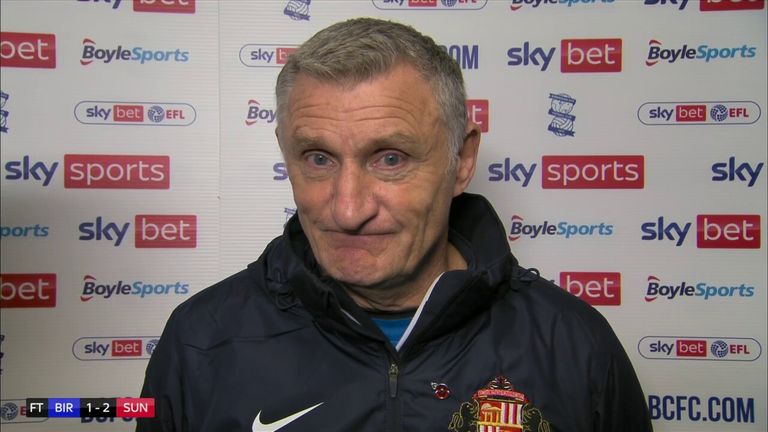 Sunderland manager Tony Mowbray told Sky Sports: “This season we’ve scored some amazing goals, played some lovely football and dominated possession generally without getting the rewards we feel we’ve deserved. Today was another side of the coin, having to dig in and particularly late on.

“We know how direct they are, 23rd for possession in the division, they’re not really bothered about that and get the ball in your half and ask questions of you.

“I know Lukas [Jutkiewicz], I signed him a long time ago for Middlesbrough, so with him, Deeney and Hogan on it was a real problem for us – bar the two centre-halves, and Ellis, we seem to be 5ft 6ins all over the pitch.

“We were hanging on a bit, but people were putting themselves on the line, the goalkeeper’s amazing for such a young boy, and the fact we dug in and showed the spirit we have – and isn’t it amazing that so many people travel to watch this football team? I’m delighted for the team, the fans and the club.”

Birmingham’s first game back after the World Cup break is a trip to Blackpool on December 10; kick-off at 3pm.

Sunderland are back on Sky Sports when they return to league action, hosting West Brom on December 12; kick-off at 8pm.

IRS reminds taxpayers of crypto income reporting ahead of 2022 filing