Home FASHION What ‘From Scratch’ on Netflix Teaches Us About Family, Joy, and Passion

Spoilers for From Scratch ahead.

From Scratch is Netflix’s latest heartfelt drama about how differences pull us together. The series follows Black American Amahle “Amy” Wheeler (Zoe Saldana) who falls in love with Sicilian chef Lino Ortolano (Eugenio Mastrandrea) while studying abroad in Florence. Caught in a timely romance ignited by Lino swooning Amy by cooking for her at his restaurant, a passionate relationship ensues. The newly in love find common ground and joy through food and end up moving to Los Angeles together to begin building a life “from scratch.”

While Amy is chasing her dream job of becoming an established artist, Lino attempts to open up an Italian restaurant in the city. Faced with the harsh realities of borders, cancer, parenting and conflicting familial allegiances, things take a drastic turn when the food that once bonded the interracial couple loses its flavor and cultural differences turn into clashes.

The eight-episode series is inspired by Tembi Locke’s memoir From Scratch: A Memoir of Love, Sicily, and Finding Home. Locke—a Black Texan woman with strong cultural roots, who is also the co-creator of the TV adaptation with her sister Attica—is brought to life by Saldana in a heartfelt tale that captures the essence of what it means to start over and prevail against the odds. Saldana gives a moving performance that retires old stereotypes of the strong Black woman and instead portrays Black women as complex and nuanced, grappling with healing family traumas and navigating loss while finding the light in others amidst our darkest days.

From Scratch: A Memoir of Love, Sicily, and Finding Home 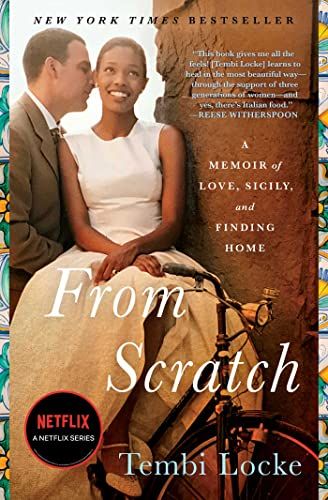 From Scratch: A Memoir of Love, Sicily, and Finding Home

In From Scratch, several relatable moments make us reflect on the struggle of balancing passion and profession. When Amy’s father begins pressuring her to attend law school, she defiantly declares, “I’m not going back to law school. I’m moving to L.A. I want to make art as my job.” Fighting social and family pressures, Amy embarks on her creative journey with Lino by her side consistently motivating and encouraging her. It’s a powerful scene to witness because in adult life it is easy to feel we have failed when we go against the grain. Amy’s courage and tenacity are inspiring because she is a Black woman deciding to live life on her own terms. To Amy, art is worth fighting for because it’s a medium for self-expression that creates the foundation of a life filled with joy and community. However, we see the cost of pursuing your dreams as the couple faces difficulties while forging their unique creative paths. Lino especially is held back by his immigration status, which keeps him from finding full-time work.

Race and family clash leading up to Amy’s marriage with Lino, as the two decide to host the nuptial ceremony in Florence where they first met. Giacomo (Paride Benassai), Lino’s patriarchal traditional Italian father, refuses to attend his son’s wedding because he sees it as a betrayal. He’s angry at Lino for leaving Sicily and for abandoning the family farming practice in exchange for a career as a chef. This disapproval creates deep family wounds that set the stage for healing and reconciliation needed from both families by the end of the series. “I left to build a life of my own,” Lino says to his father in episode 5, “Bread and Brine.” It’s a heart-to-heart moment where Lino confronts his dad about the years of neglect, pain and lost connections. Like Amy, Lino defied what was expected of him, and this drive is what ultimately kept the two bonded in love across success and sickness.

Lino is isolated from his family for both marrying outside his race—namely to a Black woman—and for putting passion above social expectations to do what he truly loved. Throughout the show I found myself rooting for them and hoping family would prevail, touched by the struggles of geographic and language barriers. As Amy’s language skills in Italian improve, so does her bond with Lino. They strengthen and encourage each other in a way that’s refreshing to see Black women never settling for less. 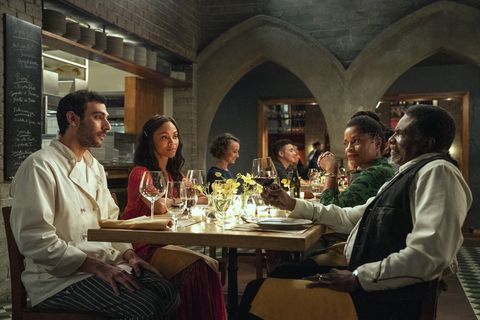 One of the most touching aspects of the show is the way Amy’s sister, Zora Wheeler (Danielle Deadwyler) radiates big sister energy supporting Amy and her relationship throughout the series. Zora is a stable type of sister who works as a teacher and, back in the day, even gave up her own lunch money when Amy lost hers. The friendship and all-around sisterly love shared by Zora and Amy is the backbone of the show, shaping moments of laughter, joy, and comfort. We see the duo help each other survive chaotic family gatherings at Thanksgiving and share tender Black girl bonding moments at home in head wraps. Zora is always right by Amy’s side even up to the point at Amy’s wedding when she marries Lino despite his family’s objections to the union. Zora and Amy represent what it means for Black women to live our best lives alongside our sisters who are cheering us on, reading us for filth (with love) when we know we need it, and reminding us that our stories matter.

Lino finally receives recognition in L.A.’s food scene when he turns the shabby Italian restaurant where he works into a successful one-night Italian fine dining cuisine experience. However, his long-term plans are quickly thwarted when he is diagnosed with a rare soft tissue cancer called leiomyosarcoma. Lino is no longer capable of pursuing his dream of becoming a chef. “You are my center,” Amy says to Lino, after his diagnosis. Now, life for the couple evolves into an act of pivoting, a heartbreaking and humbling reminder of how short life is when our dreams seem to be just around the corner.

Against the backdrop of Lino’s illness, Amy rises to the ranks in her art gallery but later decides to leave her role to teach children about creating art that inspires. However, juggling crushing medical debt and full-time caretaking, the precarity of the American health system leaves many wounds open. Her husband’s diagnosis weighs on her family and impacts her mental health, an invisible mental load so many women carry when becoming a full-time caretaker for a loved one.

During the toughest moments of his illness, Lino tells his dad, “I can’t keep fighting both you and the disease.” At this moment, Giacomo lets go of his resentment and anger towards his son and attempts to make amends after years of pain and neglect. A newfound trust forms between the two, where family trauma is transformed into a meaningful relationship. After a much-needed challenging conversation, Lino and Giacomo rekindle their long-lost father and son relationship, checking in by regularly phone calling and updating one another about lives across oceans. 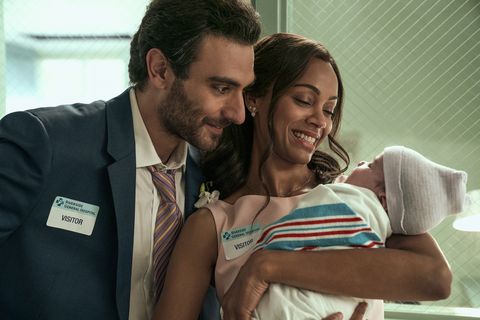 Through intensive chemotherapy, Lino recovers and the couple enjoys seven years of continued intimacy and love. Given a second shot at life, and eager to carpe diem, they adopt baby Idalia and their intercultural family grows.

From Scratch reaffirms the power of family and connection as Lino and Amy build their lives together. Raising their daughter Idalia together, both Italian and Black American cultures are celebrated with traditions, language, and most importantly food bonding Amy and Lino’s families. With Amy surrounded by support, love, and care, the series highlights Black women like her who are strong because of their community not in spite of it.

After years in remission, Lino finds out that his cancer has returned, this time spreading throughout his whole body. Death once again looms over the couple’s lives but the stakes are higher with a young child now in the picture. After weeks of tests, kidney failures, and no chance of recovery in sight, by episode seven, Lino tragically passes away at night in his L.A. home. This point in the story moved me to tears because it was an honest depiction of what it looks like to lose someone you’ve built a life with due to forces out of your control. A powerful reminder that we can and will lose the ones we love someday.

“With Amy surrounded by support, love, and care, the series highlights Black women like her who are strong because of their community not in spite of it.”

By the series finale, there’s a sense of catharsis and rebirth when Amy goes to Sicily to spread her late husband’s ashes. Amidst her sorrow and grief, she discovers a renewed will to move forward when she reconnects with Lino’s mom, Filomena (Lucia Sardo). Reconciling cultural differences, Amy is finally truly welcomed by her Italian family, finding a sense of home.

From Scratch shows with heart and nuance that bridging cultures, challenging traditions, and creating new paths are all elements of a life built from the ground up with someone you love. It’s a life where family, passion, and grief emerge as natural experiences to embrace rather than problems to solve, which in itself is a beautiful journey.

Should You Be Using Tea Tree Oil for Hair