(RNS) — Catholics and Hispanics are among the most concerned in the U.S. about the impact of climate change, with Gen Z and millennials more likely to take collective action on the matter, according to a new survey commissioned by the international humanitarian agency Catholic Relief Services.

While a majority of Americans (81%) are very or somewhat concerned about the impact of climate change in the U.S., Hispanics (92%) were among the most worried about it, compared with Black (86%) and white (76%) respondents.

When factoring in faith, more Catholics (85%) expressed concern about the effects of climate change in the U.S. than non-Catholic respondents (79%).

Additionally, American Catholics were found to be five times more likely to express that climate change is a shared responsibility than their non-Catholic counterparts — a finding that resonated with Bill O’Keefe, who is Catholic Relief Services’ executive vice president of mission, mobilization and advocacy.

“I’m not surprised by that given our church teaching about the common good, and our care for the poor, and our Holy Father’s leadership, in connecting through ‘Laudato Si’,’ the care for our environment and care for vulnerable human beings,” O’Keefe said in a virtual news conference on Tuesday (Oct. 4), when the survey’s findings were released.

“The gospel calls us to care for creation,” O’Keefe added.

Conducted online Aug. 24-30 this year, the survey included 2,009 U.S. adults. The results were analyzed in total as well as by generation, region, race/ethnicity and religious affiliation (Catholic vs. non-Catholic). About 1 in 4 survey participants (24%) described their religious affiliation as Catholic. The survey’s report did not provide a breakdown of the participants’ varying faiths, aside from Catholicism, and how that corresponded with their responses. 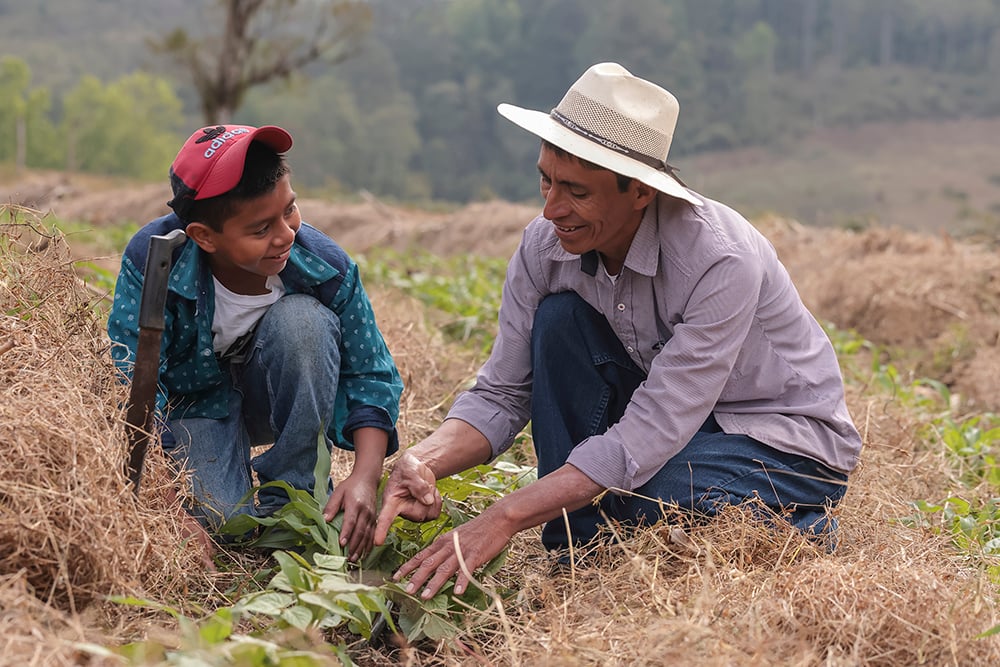 Elías Esaú García Martínez, 13, with his father, Nery García Martínez, 46, observe an associated plot of corn and beans with stubble used as soil cover to conserve the moisture in the soil during the dry season, in Opatoro, Honduras, in 2022. Photo by Oscar Leiva/Silverlight for Catholic Relief Services

Brittany Wichtendahl, a spokesperson for CRS, said the agency focused on Catholic and Hispanic demographics.

“As an organization of the U.S. Catholic Church, we were particularly interested in the perspectives of Catholics as well as Hispanics in the U.S., being the fastest growing Catholic demographic,” Wichtendahl said, adding that respondents did not know it was a Catholic-sponsored survey.

These findings come in the wake of recent international climate emergencies, including massive flooding in Pakistan that left a third of the country under water, displaced millions and killed more than 1,600 people. CRS, which operates in more than 100 countries, set up a relief fund and provided immediate cash assistance to more than 3,800 families affected by the flooding. The agency has also begun to help thousands of households get their water sources repaired.

The survey is also part of the agency’s new campaign to mobilize Catholics in the U.S. and others to support programming that helps provide farmers with drought-tolerant seeds and that creates evacuation plans in disaster-prone areas impacted by powerful storms. The agency is creating chapters and clubs in high schools, colleges and parishes. CRS is also urging Congress to provide funding for the Green Climate Fund, which underwrites major renewable energy projects.

Lheslye Perez, chief of party for CRS in Guatemala, said the country has experienced more frequent and stronger storms. Two recent tropical storms destroyed potato crops in the Guatemalan region of Chortiz. High humidity also contributed to the death of sheep and goats, which are main sources of income in the region.

She said CRS helped with food and hygiene products but fears that “this situation can and will happen again.” Perez, at the news conference, recalled a resident telling her that despite not having access to electricity or safe water, their “biggest challenge is that we have been forgotten.”

“The poorest families, the most vulnerable are the ones who pay the hardest consequences of climate change,” she said.

Overall, the CRS survey found that a majority of Americans agree immediate action is necessary to limit the impact of climate change in the U.S. (75%) and other countries (69%), and more than half (55%) feel the U.S. has a responsibility to help countries suffering from the effects of climate change. “Gen Z and millennials particularly feel this sense of responsibility to other countries,” the survey found.

Presented with a list of words that may be associated with climate change, more than three-quarters (77%) of survey participants chose heat waves, while about 2 in 3 associated climate change with drought (68%, and/or flooding (66%). About 62% cited rising sea levels, and half (49%) associated it with not enough food and water. 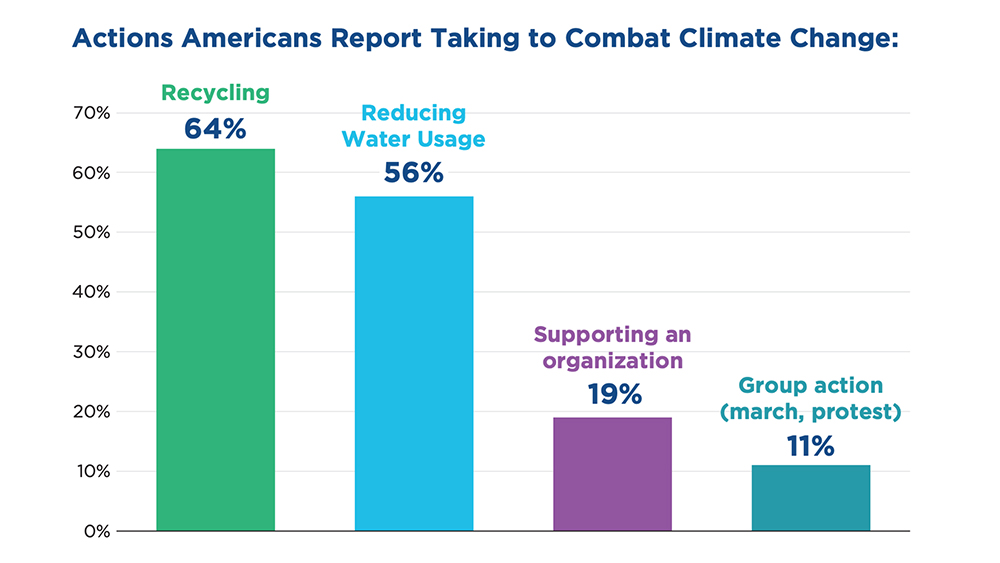 According to survey findings, most Americans (85%) have taken steps to reduce the impact of climate change, the most common being that they separated trash from items that can be recycled (64%). More than half (56%) have reduced water usage, and 38% have shifted to more eco-friendly brands. About 1 in 5 say they have composted (22%) and/or supported an organization that fights climate change (19%). Fewer bought a hybrid or electric vehicle (12%) and/or participated in a march, protest or boycott (11%) to call attention to the impact of climate change.

The survey found that younger people are the most likely to take bigger or more collective steps to address climate change, with 30% of Gen Z and 25% of millennials saying they have supported an organization that fights climate change, compared with 14% of Gen X and 16% of baby boomers.

Topping motivating factors for Americans to take action against climate change are drought-induced famines (48%) and catastrophic, widespread flooding (47%), followed by
globalization (44%), according to the survey.

Two in 5 feel they would be motivated to act by more frequent and powerful storms (40%) and/or fighting for diminishing resources (39%). Nearly as many cite their faith/values (35%), while increased migration (23%) is least likely to spur Americans into action to help other countries fight the effects of climate change, the survey found.